Dan Savage: Being out is doing the heavy lifting 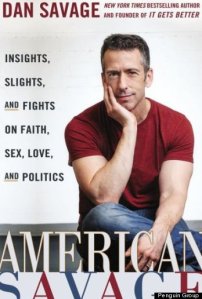 Dan Savage has a brand new book out. American Savage was just published this week. Get it on Amazon.

One complaint I often hear during Pride Month is: “What’s so important about being out? Why do gay/bi/trans people have to make such a big deal out of it?”

Oh, just little stuff — like civil rights and all that.

In episode 342 of the Savage Lovecast podcast, sex advice columnist, author, and gay rights advocate Dan Savage eloquently and clearly nailed the point about why being out is so damn important for sexual minorities.

As he recorded that episode, the state legislature in Minnesota was debating whether that state would become the 12th in the union to legally sanction marriage equality. (It did, on May 13, 2013.)

If marriage equality comes to Minnesota this week, it’ll be the 12th state to achieve marriage equality in the US — and the third since the US Supreme Court heard oral arguments on the federal Defense of Marriage Act and California’s Proposition 8.

The pace of change is staggering, heartening and thrilling. So little is going right, but this is going very right — and it’s a little flabbergasting. I remember saying in a New York Times op-ed I wrote not too long ago that I didn’t expect to see marriage equality in the U.S. in my lifetime. But here it is, happening in my lifetime.

What is driving this? What is making this happen? The very thing that the original LGBT civil rights activists identified as our secret weapon: People are out now.

People are out to their friends, families, coworkers and colleagues. And that changes everything.

In Delaware, state Senator Karen Peterson, who has been in a lesbian relationship for 24 years and was not out — she came out during the floor debate in the Senate. She said she wasn’t sure what she was going to do, she’s a very private person. (OK, your relationship is actually kind of public, and nobody says straight people should have to hide their husbands and wives to keep their private lives private)

…And then the opposition stood on the floor of the state Senate in Delaware and lied. They said that being gay is a choice, that it was a sickness and sinful — and that same-sex marriage somehow imperils or threatens the relationships of opposite sex couples.

Here’s what she said as she came out last week: “We are as God made us. We are not broken; we do not need to be fixed. If my happiness demeans or diminishes your marriage, then you need to work on your marriage.”

Right fucking on and welcome out — fully out! The rest of the way out.

Meanwhile, in Nevada, where they’re debating repealing that state’s ban on same-sex marriage…

…OK, let’s just pause for a second here. Nevada, home of Las Vegas, where you can insta-married and insta-divorced, where prostitution is legal. But where same-sex marriage is illegal because it’s a threat to the sanctity of quickie marriages in roadside wedding chapels performed by busted Elvis impersonators.

But anyway, Nevada state Senator Kelvin Atkinson came out during the debate over repealing that state’s ban. He said “I am black and I am gay.” This was news to his colleagues and to his constituents. And it is going to change things.

After the governor of Rhode Island signed the marriage quality bill last month, here’s what state Senator Donna Nesselbush said. She thanked all those who came out before it was safe to do so. “Together we shattered the myths. We changed hearts and minds on this issue one at a time.”

That is it in a nutshell. That is the success of the LGBT civil rights movement.

We’ve still got work to do. …But we are winning. And we are winning on the issue that touches at the heart of who we are, which is about love, relationships and family. It’s about recognizing that we can love, and that our relationships are equal to and as valid as the relationships of heterosexuals. And our families deserve the same rights, protections, and responsibilities.

This cuts to the heart of what our movement has been about from the start.

When we talk about same-sex marriage, we get bogged down in these conversations about banquet halls and wedding cakes and florists — about the ceremony and the party. But that’s not where the rubber meets the road. That’s not really where same-sex couples’ hearts get broken. It’s when they get discriminated against. And the powers and rights of marriage are always most important at the worst moments of life. During a medical emergency. After the death of a spouse.

That’s when the most important marriage rights really kick in, and that’s when the most damage is done to same sex couples. It’s not the florist who won’t make arrangements for a gay wedding who really hurts a same-sex couple when they’re vulnerable. It’s a hospital administrator turning the partner away — as we saw recently in one case, having the male spouse of a gay man removed from his partner’s room in handcuffs during a medical emergency. That’s when hearts break.

…We don’t have full equality in the U.S. We still have a lot to do. …We’ve still got Don’t Ask, Don’t Tell to complete. (It doesn’t protect trans people in the military.) We’ve got the federal Defense of Marriage Act to overturn. (C’mon, Supreme Court!)

I don’t want to wait a moment longer for my equality.

So if you’re out there listening, and you are LGBT, and you are not out to your friends, your family, your coworkers; and if you’re in a position where you can come out, you should.

I’m not saying this to people who are going to be thrown out on the street. If you’re 15 years old and your parents are batshit fundamentalists and you’re in the closet, OK, you get a pass. But if you’re 22-23 years old and out of college, you don’t get a pass. It’s time to ovary up and come out.

Because every one of us who is not out is delaying that moment of full equality. You don’t want to wait one more moment for your full equality, or make anyone else wait? Then you’ve gotta be out. You’ve gotta tell the truth. You’ve got to open your mouth and tell the people who love you who you are.

To be out is — as it always has been — the single most important political action that any lesbian, bi, gay or trans individual can take. If you have done that, you have paid your dues. Let no one guilt trip you about not volunteering, not phone banking, not giving money — although you should do all those things — if those things aren’t things you can do or don’t enjoy doing.

Because if you are out, you have done the heavy lifting. And you’ve brought closer that moment of full equality.

True, nowhere in this podcast does Savage mention polyamorous people or others who are in consensual non-monogamous relationships. But he did speak out in another recent episode about how important it is for non-monogamous people to be out as well.

For any non-obvious minority group — especially sexual, gender, or relationship-style minorities — outness is a key concern. The more of us who are closeted, the more marginalized we are and the more risk we all face.

But when more of us are out, it’s harder for people in the mainstream to dismiss us as “those weirdos over there.” When we’re people they know, it’s harder to say we don’t matter as much as they do, or deserve the same rights that they take for granted.

Why fluid-bonded sex is, um, “sticky” »
« Dan Savage on why you don’t hear about successful open relationships

8 thoughts on “Dan Savage: Being out is doing the heavy lifting”

Leave a Reply to Come out, come out, wherever you are! | polyhydra - The Polyamorous Dragon Cancel reply